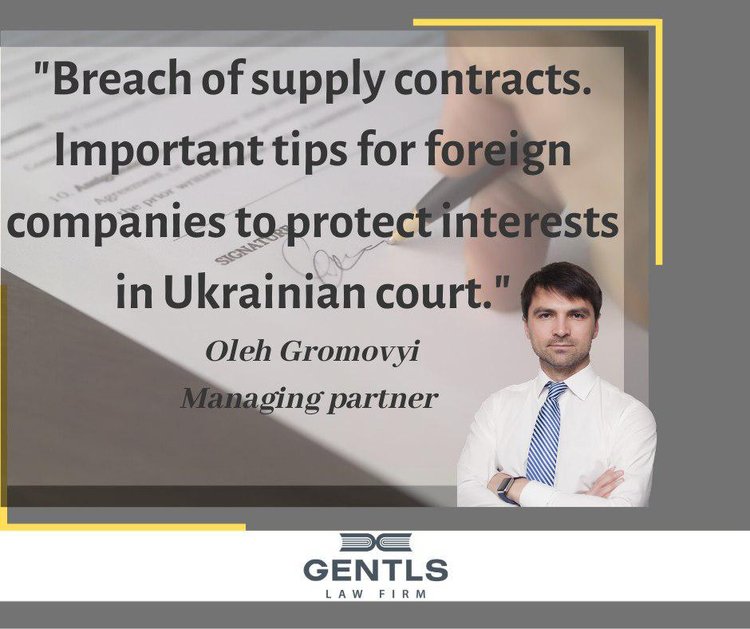 This article covers features of proceedings in Ukrainian courts in disputes arising from the international supply contracts.

The most numerous disputes arising from the supply contracts are disputes over recovery of debts for supplied goods.

The Law of Ukraine "On Private International Law", the Code of Commercial Procedure of Ukraine provides for cases in which Ukrainian courts may commence proceedings and resolve cases involving foreign companies. In particular, the following cases can be attributed to disputes arising from supply contracts:

- if the legal entity of the defendant resides on the territory of Ukraine;

- if a branch or representative office of a foreign legal entity - the defendant resides in Ukraine;

- if obligations under the contract, which are the subject of dispute are to be fully or partially fulfilled on the territory of Ukraine;

- if the parties have established the jurisdiction of the courts of Ukraine in the case in the supply agreement;

- in other cases provided for by the law of Ukraine and the international treaty of Ukraine.

Thus, if the parties have established in their contract the jurisdiction of other court than the court of Ukraine in the case, then in case of filing a lawsuit with the commercial court of Ukraine seeking resolution of a dispute, such a court should reject a case  and if the proceedings on the case are already mistakenly commenced - such proceedings are to be terminated upon  the request of one of the parties or upon the court initiative (such conclusions may be found in the resolution of the Supreme Court of January 16, 2019 in case No. 910/22947/17 and other).

At the same time, subject to valid arbitration clause dispute arising from the supply contract shall not be justiciable in Ukrainian commercial court. The commercial court shall interpret any discrepancies in the text of the arbitration agreement and in case of doubt regarding its validity, binding power and enforceability in favor of its validity, binding power and enforceability, ensuring the principle of autonomy of the arbitration agreement.

As for the proof of the fact of delivery of goods in court, which is often challenged by the defendant, this fact is proved by the relevant primary documents, which can also be specified by the parties in the supply agreement. As a rule, such documents are consignment notes, bills of lading, invoices, powers of attorney to receive goods by the purchaser’s representative, the act of reconciliation of mutual accounts. In such a case, the laws of Ukraine provide no specific requirements regarding foreign contractors.

As regards the quality of the delivered goods, it proceeds from Ukrainian case law that the procedure for accepting goods in terms of quality should be correctly laid out in the contract. As an example we can provide the Supreme Court ruling of January 8, 2019 in case No. 925/1693/17, where the parties executed a contract for the supply of grain and the purchaser made an advance payment for the goods. However, the supplier delivered low-quality goods, therefore, the purchaser returned the goods to the supplier, seeking from the court to impose recovery of  the advance payment, the costs of storage and return of the goods, as well as penalties on the supplier. The Supreme Court agreed that the claim of the purchaser is subject to satisfaction, since the  procedure for acceptance of goods in terms of quality was duly laid out the contract. In particular, as the Supreme Court specified, “based on the terms of the supply agreement, it was determined that the moment the plaintiff accepted the goods in terms of quality is the results of the quality evaluation by the certified laboratory of the place of discharge of the goods. Thus, the laboratory analyses of the grain samples provided by the plaintiff of November 21, 2017 ... at the plaintiff’s request ... found a mismatch, which manifested in a smell non-peculiar to healthy grain (moldy), which was entered into analysis protocol ... ”

Thus, in the case of the delivery of low-quality goods, the key to success in court will be a duly drawn up supply contract in terms of the acceptance of goods by quality and proper documentation of non-compliance of the goods with quality specifications in strict adherence to the procedure established by the supply contract.

In conclusion, it is worth noting that the rules for the settlement of disputes involving the foreign company in Ukrainian courts are also determined by bilateral international treaties, which may differ from the general rules outlined in this article. Therefore, in case of a dispute regarding the violation of supply contracts by Ukrainian contractors, we recommend you to consult Ukrainian specialists to assess a specific case and provide legal assistance.